Below are common questions that we are asked. If you have other questions, please search for that topic at right or contact us. For questions particular to vocations, see the Frequent Vocations Questions page.

Does the Institute have its own seminary?

Yes. Located in the Archdiocese of Florence, Italy, it is named St. Philip Neri Seminary. You may learn more on the International Seminary page.

What is the location of the Institute’s seminary and motherhouse?

What is the Institute’s mission statement?

“The mission of the Institute of Christ the King Sovereign Priest is to spread the reign of Christ in all spheres of human life by drawing from the millennial treasury of the Roman Catholic Church, particularly her liturgical tradition, the unbroken line of spiritual thought and practice of her saints, and her cultural patrimony in music, art and architecture. The Institute accomplishes this primarily through a solid and well-rounded formation of its priests, rooted in Catholic tradition and carried out at its international seminary in the Archdiocese of Florence. Our priests, conscious of the need for their own sanctification, strive to be instruments of God’s grace through their apostolic work discharged in the churches assigned to the Institute, its schools, its missions in Africa, by preaching retreats, teaching catechesis, and providing spiritual guidance. The Institute of Christ the King operates under the patronage of the Immaculate Conception, to Whom it is consecrated.”

What sort of active apostolate does the Institute exercise?

In addition to serving the spiritual needs of the faithful from day to day through the celebration of Holy Mass, hearing confessions, administering the Sacraments to the dying and infirm, teaching catechism, etc., the Institute also offers spiritual retreats, and organizes activities for youth, especially summer camps, and operates schools (in Lille and Montpellier in France and in Brussels, Belgium). There has been rapid growth of the Institute in locations across our nation, and the Institute will continue with the help of Divine Providence to develop here in the United States the broad spectrum of its apostolate as it seeks to promote the Reign of Christ for people of all ages and walks of life. The Institute also has several missions in Africa, where its missionary priests work amid very difficult conditions to bring the truth and charity of Christ the King to those souls who do not yet know Him.

Who belongs to the Institute?

The Institute of Christ the King is a society of apostolic life which has a whole range of possibilities for membership.
Currently, we have about 50 priests who are full members of the Institute, but there is also the possibility for priests incardinated in a diocese to become affiliated with the Institute and thus share in its spirituality without any further canonical bonds.
The Institute of Christ the King also has a growing number of non-ordained members that help our priests in their apostolic life, similar to the way of religious brothers. Our oblates, as we call them, are working with their respective talents and are members of the clergy in a broader sense through the minor orders they receive during their training.
Fledgling members of the Institute are our seminarians, which count 80 worldwide. For two years, the Institute has also had a female branch called the Sisters Adorers of the Royal Heart of Jesus and already count 14. In addition, the Society of the Sacred Heart offers the laity an association with the spirituality of the Institute and has already assembled hundreds of our friends under the patronage of the Sacred Heart and the Immaculate Conception.

Is the Institute a French community?

No, it is not. Msgr. Gilles Wach, the founder and prior general of the Institute, being himself of French origin but trained in Italy, has always stressed that the Institute is neither French, German, English, Swedish, Italian, American, nor European, African, nor Asian, but Roman Catholic. Next to Latin, which is used for the sacred liturgy, French is our common language, used for studies and conversation. This gives our members exposure to at least one other modern language and makes it easier for everyone to communicate with the founder for the sake of becoming exposed to the proper charism of the Institute. Most of our seminarians also speak English well, and many are eager to learn more languages, such as Italian or German, which is not obligatory.

Does the Institute have a preference for the baroque style?

Beauty is the outward expression of truth’s perfection. Although the richness of the baroque style admirably expresses the sublimity of the divine truths of our Faith, there are also other artistic styles which, each in their own way, contribute to give us a little glimpse of the heavenly beauty of the eternal Truth. For example, the Institute’s church in Wausau, Wisconsin, Saint Mary’s Oratory, which enshrines a beautiful statue of the Virgin and Child which dates back to the 1470’s, has undergone complete restoration in an authentic Gothic style. The Oratory of Saint Francis de Sales in St. Louis is a very remarkable representation of Neo-Gothic splendor, while the recently restored Old Saint Patrick’s Oratory in Kansas City, Missouri, is a fine example of late-period Classical style and architecture.

Why do the Institute priests wear their own choir dress?

The Institute has its own strong identity due to its holy patrons and canonical life. In 1994, the Institute was placed under the patronage of the Immaculate Conception, and since its foundation, it has been inspired by St. Benedict, St. Thomas Aquinas, and especially St. Francis de Sales.
Traditionally, priests living in a community attached to a church and dedicated to the celebration of the solemn Latin liturgy but without religious vows have been called secular canons and were distinguished by their own choir dress.
In 2006, the Cardinal Archbishop of Florence, responsible for the overview of the Institute’s life, bestowed upon our priests and oblates their specific choir dress. The choir dress consists of a rochet, a mozzetta, the cross of St. Francis de Sales on a blue and white ribbon, and a biretta with a blue pom-pom. The superiors have a blue mozetta, the priests have a black mozetta with blue piping, and the oblates wear the cross and ribbon on the surplice. The blue stands for our complete dedication to the Blessed Mother and is traditionally the color shown on St. Francis de Sales in most paintings of him. The choir dress expresses the strong unity, spiritually, and identity of the Institute and adds solemnity to the liturgy.

What does the Institute’s coat of arms symbolize?

The motto of the Institute is expressed in its coat of arms. At the service of Christ the King, the Institute is totally committed to working for His Reign over the minds and hearts of all people. Thus the globe, or orbis, represents the universal Kingship of Christ. This globe, or orbis, is set on a blue background, since Our Lady of the Immaculate Conception is the principal Patron of the Institute, and all of its members are especially consecrated to her. The fleur de lys, symbol of purity, further expresses the patronage of Our Lady of the Immaculate Conception, while being at the same time, the symbol of the city of Florence, near which the Motherhouse and Seminary of the Institute are located.

House of Our Lady of the Most Holy Rosary Ardee

Church of the Immaculate Heart of Mary Belfast 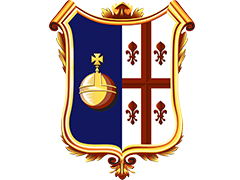 Live stream from the Sacred Heart Church in Limerick

We use cookies on our website to give you the most relevant experience by remembering your preferences and repeat visits. By clicking “Accept All”, you consent to the use of ALL the cookies. However, you may visit "Cookie Settings" to provide a controlled consent.
Cookie SettingsAccept All
Manage consent

This website uses cookies to improve your experience while you navigate through the website. Out of these, the cookies that are categorized as necessary are stored on your browser as they are essential for the working of basic functionalities of the website. We also use third-party cookies that help us analyze and understand how you use this website. These cookies will be stored in your browser only with your consent. You also have the option to opt-out of these cookies. But opting out of some of these cookies may affect your browsing experience.
Necessary Always Enabled
Necessary cookies are absolutely essential for the website to function properly. These cookies ensure basic functionalities and security features of the website, anonymously.
Functional
Functional cookies help to perform certain functionalities like sharing the content of the website on social media platforms, collect feedbacks, and other third-party features.
Performance
Performance cookies are used to understand and analyze the key performance indexes of the website which helps in delivering a better user experience for the visitors.
Analytics
Analytical cookies are used to understand how visitors interact with the website. These cookies help provide information on metrics the number of visitors, bounce rate, traffic source, etc.
Others
Other uncategorized cookies are those that are being analyzed and have not been classified into a category as yet.
Advertisement
Advertisement cookies are used to provide visitors with relevant ads and marketing campaigns. These cookies track visitors across websites and collect information to provide customized ads.
SAVE & ACCEPT
Powered by